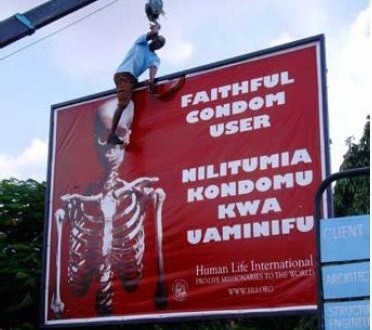 In 2004 August more than 40 million condoms of the Engabu brand were found to be defective and were recalled to be destroyed. This was after a huge public outcry concerning condom failures which may have exposed many people to HIV/AIDS. Unfortunately, more reliable condoms are not a solution. Independent of the reliability p, repeated use of condoms with a p% failure rate is like unto a game of Russian Roulette with a 100/p chambered revolver —so, for example a 20% failure rate would correspond to Russian Roulette with a five chambered revolver. The outcome of such a game is determined by:

Theorem. The risk of contracting AIDS during so-called “protected sex”approaches 100 percent as the number of episodes of sexual intercourse with an infected person increases.

Proof: Consider a Bernoulli random variable with value 1 if condom fails and zero otherwise. Let X be the sum of n such variables. Assume the variables are independent and identically distributed. For any n, the sum has a binomial distribution and it is a simple exercise to show that the probability that X > 0 (i.e. of at least one failure) approaches 1 as n increases.

Two important related and seemingly contradictory effects are possible when condoms are promoted:

Since factors (E1) and (E2) work in opposite directions, much polemic has been generated by those who, for economic or ideological motives or simply because they fail to understand that both effects are simultaneously possible, focus only on E1 and ignore the above theorem. In reality, evidence indicates that when condoms are distributed, the alleged benefit due to factor E1 is more than nullified by E2. According to Dr. Edward C. Green, director of the AIDS Prevention Research Project at the Harvard Center for Population and Development Studies,

“There is a consistent association shown by our best studies, including the U.S.-funded ‘Demographic Health Surveys,’ between greater availability and use of condoms and higher (not lower) HIV-infection rates,” he said in an interview earlier this year.

“This may be due in part to a phenomenon known as risk compensation,” Green explained, “meaning that when one uses a risk-reduction ‘technology’ such as condoms, one often loses the benefit (reduction in risk) by ‘compensating’ or taking greater chances than one would take without the risk-reduction technology.”

If a group or individual is already maximally promiscuous and condom using, effect E2 will be negligible. However, in this case, the reduction in transmission probability per coital act achieved by condoms will be more than counterbalanced by the fact that, for HIV discordant couples, the asymptotic limit of repeated condom roulette is virus transmission with probability 1. As a result, the overall residual infection rate for such a group will remain high —despite condom promotion and use. Only behavioral shifts can reduce overall infection rates. This partly explains why, notwithstanding the promotion of condoms, transmission rates for certain populations, such blacks in many US inner city areas and gays have remained many times the average for the population as a whole. In the case of gays, reductions in average life spans exceeding 8 years have been observed and, in some studies as much 20 years. HIV infection rates for US blacks in 2003 were 650% higher than for the population as a whole.

For populations of intermediate promiscuity, effect E2 will tend to outweigh E1 and the promotion of condoms can be expected to increase the net infection rate, a fact in accordance with the studies cited by Green. It is notable that every year, for many years, the South African government has distributed hundreds of millions of condoms in a futile bid to control the AIDS epidemic. Despite this, the AIDS rate has risen to almost 30%. and millions are condemned to die in this futile and unethical attempt to refute the now empirically based null hypothesis that “condoms are ineffective in fighting the AIDS epidemic”.

In the case of a highly monogamous population, factor E1 is insignificant and promotion of condoms can only increase the virus transmission rate. This might be the case in some
poor countries, where promiscuity is kept low, precisely because the majority of the population can afford neither condoms nor the shame of children born out of wedlock. In such a situation the false sense of security caused by the distribution of free condoms can be especially significant in increasing disease transmission. Moreover, the very notion that unfaithful men will use condoms to protect their wives is absurd. In reality many prefer to hide their unfaithfulness and/or HIV status. And what of normal couples who want children?

In every case, we see that the promotion of condoms fails stop the AIDS epidemic and can actually increases the level of infection. Despite the annual use of over 10 billion condoms AIDS rates remain high. Halting the epidemic can only be done by promoting abstinence and monogamy. In this sense, the recent controversial claim by Pope Benedict that condoms cannot stop the AIDS epidemic and can even worsen it is good science and good mathematics. Those who proclaim otherwise may have blood on their hands.

The following table based upon data from the 2003 World Factbook of the US Central Intelligence Agency shows HIV/AIDS rates as a function of Catholic population.

Previous The Democrats: Party of Infanticide
Next Brain Death – The Hoax That Won’t Die