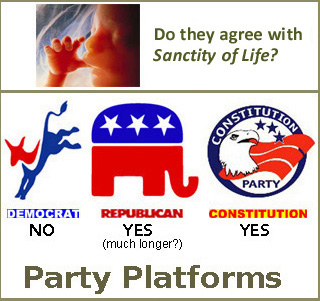 The Democrats: Party of Infanticide

The following exchange between the chief sponsor of the bill banning partial abortion bill, Senator Rick Santorum (R-Pa.), and the leading opponent, Senator Barbara Boxer (D-Ca.) occurred on October 20, 1999. No comment is necessary.

Senator Boxer: I support the Roe versus Wade decision.

Santorum: So you would agree any child that’s born has the right to life, is protected under the Constitution? Once that child is born?

Boxer: I agree with the Roe v. Wade decision. And what you are doing goes against it and will harm the women of this country. And I will speak to that issue when I get the floor myself.

Santorum: But I would like to ask you a question. You agree, once that child is born, is separated from the mother, that that child is protected by the Constitution and cannot be killed? Do you agree with that?

Boxer: I would make this statement: That this Constitution, as it currently is — some of you want to amend it to say that life begins at conception. I think when you bring your baby home, when your baby is born — and there is no such thing as partial-birth — the baby belongs to your family and has all the rights. But I am not willing to amend the Constitution to say that a fetus is a person, which I know you would.

But we will get into that later. I would prefer to address –I know my colleague is engaging me in a colloquy on his time, and I appreciate it — I will answer these questions.

Santorum: If I can reclaim my time: First of all, the AMA still believes this is bad medicine. They do not support the criminal penalties provisions in this bill, but they still believe — I think you know that to be the case — that this procedure is not medically necessary, and they stand by that statement.

Boxer: I will tell you why I don’t want to engage in this. You did the same conversation with a colleague of mine, and I never saw such a twisting of his remarks. [Editor’s note: See Nov. 14, 1996 NRL News, page 24, for transcript of an exchange between Santorum and Senator Russ Feingold (D-Wi.).]

Santorum: Well, be clear, then. Let’s be clear.

Boxer: I am going to be very clear when I get the floor. What you are trying to do is take away the rights of women and their families and their doctors to have a procedure. And now you are trying to turn the question into, “When does life begin?” I will talk about that on my own time.

Santorum: What I am trying to do is get an answer from the senator from California as to where you would draw the line? Because that really is the important part of this debate.

Santorum: Are you suggesting Roe v. Wade covered the issue of a baby in the process of being born?

Boxer: I am saying what Roe v. Wade says is, that in the early stages of a pregnancy, a woman has the right to choose. In the later stages, the states have the right, yes, to come in and restrict. I support those restrictions, as long as two things happen: They respect the life of the mother and the health of the mother.

Santorum: I understand that.

Santorum: I would say to the senator from California, I am not twisting anything. I am simply asking a very straightforward question. There is no hidden question here. The question is —

Boxer: I will answer it again.

Santorum: Once the baby is born, is completely separated from the mother, you will support that that baby has, in fact, the right to life and cannot be killed? You accept that; right?

Boxer: I don’t believe in killing any human being. That is absolutely correct. Nor do you, I am sure.

Santorum: So you would accept the fact that once the baby is separated from the mother, that baby cannot be killed?

Boxer: I support the right — and I will repeat this, again, because I saw you ask the same question to another senator…

Santorum: All the person has to do is give me a straight answer, and then it will be very clear to everybody.

Boxer: And what defines “separation”? Define “separation.” You answer that question. You define it.

Santorum: Well, let’s define that. Okay, let’s say the baby is completely separated. In other words, no part of the baby is inside of the mother.

Boxer: You mean the baby has been birthed and is now in its mother’s arms? That baby is a human being.

Santorum: Well, I don’t know if it’s necessarily in its mother’s arms. Let’s say in the obstetrician’s hands.

Boxer: It takes a second, it takes a minute… I had two babies, and within seconds of their birth —

Boxer: Well, you didn’t have any.

Santorum: My wife and I had babies together. That’s the way we do things in our family.

Santorum: Good! All I am asking you is, once the baby leaves the mother’s birth canal and is through the vaginal orifice and is in the hands of the obstetrician, you would agree that you cannot abort, kill the baby?

Boxer: I would say when the baby is born, the baby is born, and would then have every right of every other human being living in this country. And I don’t know why this would even be a question, to be honest with you.

Santorum: I am asking for you to define for me what that is.

Boxer: I don’t think anybody but the senator from Pennsylvania has a question with it. I have never been troubled by this question. You give birth to a baby. The baby is there, and it is born. That is my answer to the question.

Santorum: What we are talking about here with partial birth, as the senator from California knows, is a baby is in the process of being born —

Boxer: “The process of being born.” This is why this conversation makes no sense, because to me it is obvious when a baby is born. To you it isn’t obvious.

Santorum: Maybe you can make it obvious to me. So what you are suggesting is if the baby’s foot is still inside of the mother, that baby can then still be killed.

Boxer: No, I am not suggesting that in any way!

Santorum: I am asking.

Boxer: I am absolutely not suggesting that. You asked me a question, in essence, when the baby is born.

Santorum: I am asking you again. Can you answer that?

Santorum: I am not going to put words in your mouth…

Boxer: I hope not.

Santorum: But, again, what you are suggesting is if the baby’s toe is inside the mother, you can, in fact, kill that baby.

Boxer: You are the one who is making these statements.

Santorum: We are trying to draw a line here.