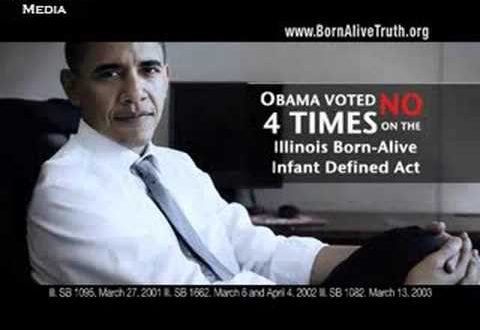 “Its above my paygrade” (to determine when life begins) —Barack Obama

It now seems to be well established that Barack Obama obstructed the Illinois Born Alive Infant Protection Act and, moreover, lied about his reason for doing so. It is probable that Obama’s untruth was neither a misspeak, nor some careless act of forgetfulness — he is far too intelligent for that. His opposition to the first two Born Alive Infant Protection Bills was ostensibly based on the fact that they did not contain clauses protecting the Roe versus Wade decision. Obama understood there existed no scientific or ethical distinction between a very late term abortion and death by post partum neglect (shelving to die —without solace— in soiled linen baskets and discarded as medical waste -see video) and that banning the latter might, consequently, endanger the legality of the former.

Obama must have recognized that human development is a continuum, a process in which it is impossible to draw meaningful and obvious subdividing lines for the purpose of making moral judgements. Such distinctions as can be observed, are, from a scientific viewpoint, completely insignificant and, therefore, ethically inconsequential. For example, what reasonable person can point to a significant structural difference between a baby one second before birth and the same baby one second after birth? An immediate corollary to this reasoning is the moral equivalence of, say, partial birth abortion and infanticide.

Thus, Obama was faced with the choice of either supporting a bill which logically endangered his pro abortion stance or blocking the legislation, thereby supporting infanticide. Since no politician wishes to be seen condoning infanticide, the legislation had to be prevented from leaving the committee, which is what appears to have happened. Obama and other Democrats on the committee voted down the bill even though it contained the desired Roe versus Wade exclusion clause. It only remained to justify this action. Since the decision was ethically unjustifiable a lie was forthcoming. Once again, Obama claimed that he had voted against the Bill for lack of the appropiate exclusion clause —except this time his objection had no merit.

Obama’s actions do not resemble the moral confusion typical of ethical relativists. His statements and actions show that he clearly saw the logical consequences of passing the Born Alive Infant Protection Act (even with an exclusion clause), obstructed it, and, for political expediency, lied about his reason for doing so.

Barak Obama voted against the Born Alive Infant Protection Act. This act addressed cases where, during an abortion procedure, the live infant was actually born. The act would have banned killing the living child. According to National Right to Life Commission RLC spokesman Douglas Johnson:

“Newly obtained documents prove that in 2003, Barack Obama, as chairman of an Illinois state Senate committee, voted down a bill to protect live-born survivors of abortion — even after the panel had amended the bill to contain verbatim language, copied from a federal bill passed by Congress without objection in 2002, explicitly foreclosing any impact on abortion. Obama’s legislative actions in 2003 — denying effective protection even to babies born alive during abortions — were contrary to the position taken on the same language by even the most liberal members of Congress. The bill Obama killed was virtually identical to the federal bill that even NARAL ultimately did not oppose.”

Obama lied by claiming that he voted against the bill in committee because it lacked a codicil protecting the “Roe versus Wade” legislation. However, official documents of the Illinois Senate reveal that the amended 2003 bill did in fact contain such a protection. In particular, the following document shows the actual vote about which Obama lied. It can be seen that Obama voted YES on the amendment —which passed— and NO on the final vote, thereby killing the amended bill in committee.

Three bills were introduced during Obama’s tenure in Illinois Senate. The following is a brief chronology of events.

Previous A Nobel Prize For Inanity
Next The Democrats: Party of Infanticide