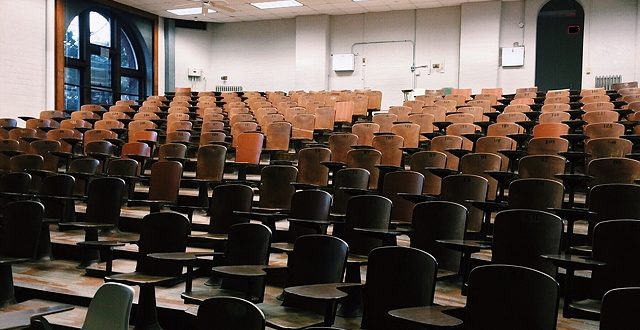 Professing at the podium

The problem with some professors is that they only seem to know one thing: problems.

A modern philosophy professor zigzags during the eighty minutes lecture between derisively questioning the term “truth” and passionately recycling the usual departmental politics. A doctor of ethics categorically concludes that ethics cannot be taught and that, consequently, no judgments (ethical or otherwise) will be allowed during the course. Ethics, he contends, “is not a matter of content, but bringing students to reflection by means of problematization.” Their colleague from the humanities mockingly queries the very concept of “human nature” while rhetorically wondering why so much thought has been invested in attempts to define it.

In spite of variations, these college professors share a common preoccupation: to “problematize” is the essence of education. They are discipline agnostics; some, outright nonbelievers. They dogmatically attack discipline believers and hopeful seekers for, yes, their dogmatism. All student comments are equally celebrated, while the discipline’s very substance and worth are just as equally doubted.

Since boundless openness is the only acceptable value, non-judgment is imposed. Pinches of cynicism and fashion consciousness — and occasionally of indolence — are often part of the mix. Whether heirs of Descartes, Hume, Kant, Darwin, Marx, Nietzsche, Freud, Foucault or any number of modern and postmodern thinkers, an intellectual and ethical limbo supports their podiums.

To “problematize” is a popular postmodernist, critical theory and critical thinking ringtone. Simply stated, it means knowledge cannot be taken for granted but must be openly approached as a “problem”. More than merely identifying and stating a question or issue, the verb connotes the sceptic’s challenge to received, reasonable or commonsense notions.

The exercise may soon morph into subjectivism, relativism, and even nihilism. The ethics professor, for example, shuns all talk of ethical principles, virtues and conclusions, for these reek of naiveté, intolerance, tradition, or the authority (imposition) of some (usually oppressive) power structure. His students will spend the term “problematizing”, endlessly shuffling possible interpretations of “good” and “evil” by means of value clarification and thought experiments such as trolley problems, survival lotteries, and lifeboat games. The shock, intrigue and even amusement factors will weigh more than the soundness of the arguments.

Armed with “buts”, while lacking good reasons, students will construct and deconstruct, define and redefine “the problem” until they secretly confirm what they had suspected all along: that it is impossible or arbitrary to reach ethical conclusions, because they are always debatable and ultimately meaningless. Woe to them who dare to reasonably argue otherwise! Their position will likely be labeled as simplistic, intolerant, fundamentalist or merely old-fashioned. Since there is no such thing as a “right” or “better” answer, individual preferences or feelings, voiced by the most persevering or forceful debater, are the final words.

Whether advertently or not, the ethics professor has imposed non-judgment. Even common moral intuitions, such as “stealing is ethically wrong”, have been subjected to the dogmatic straightjacket of the open-ended problem. An inevitable question—if there is no truth, how can there be philosophy?—is, though, never entertained.

To reasonably assess a discipline is different from according it scornful and sweeping dismissal — an attitude particularly discordant when undertaken by those voluntarily in charge of its teaching. To critically claim that there are limits to what may be known is different from claiming that nothing may be known about anything whatsoever. In its extreme expression, openness becomes indifference; inquisitiveness, endless doubt. An open window, just like an open mind, lets in the fresh air but also the flies and the dirt. A well-fitting screen is necessary out of prudence and common sense. Besides, if all knowledge is to be questioned, how is one to tell whether the window is open, and who could be trusted with that task? What is a window, for that matter? In this cognitive vacuum, openness, too, is problematic: an open mind is as justified as a closed one, and as unintelligible. Defining and “privileging” openness presupposes some criterion. Reasonably supporting and deliberately choosing openness involves — horror! — a judgment.

The word “professor”, the dictionary tells us, comes from the Latin profiteri: to declare publicly or profess. Thus, a professor is a “person who professes to be an expert in some art or science.” The profession thus presupposes some expertise in a course of learning and, consequently, the possibility of the attending discipline. Without an object, the affirmation of expertise rings hollow. The verb “to profess”, though, has an additional meaning: to make a pretense of or pretend. “To pretend” is to make believe, to feign. Is this the meaning of some professing at the podium?

Many will claim that the podium has always been used by not a few college professors as the arena for favorite quirks or particular quarrels. Quite likely. Yet, historical maladies are no less troubling; probably more so. Young adults hardly need their moral and intellectual doubts to be legitimized, particularly when this springs from sources they deem knowledgeable and credible.

New York Times columnist David Brooks, for instance, recently wrote about the study led by Notre Dame sociologist Christian Smith among America’s young adults (Smith et al., Lost in Transition, OUP: 2011). Facing a moral problem, most respondents (ages 18-23) could neither determine the right decision nor discriminate moral from non-moral situations. Individual feelings and preferences took the place of basic ethical reasoning. (For a vivid portrayal of such flawed ethical thinking, and ignorance of elementary historical facts, see Ray Comfort’s documentary film 180). Brooks added that “many of these shortcomings will sort themselves out” as these young people enter social institutions that “inculcate certain habits”.

But, what sort of habits will these be? Moreover, do we wish our college graduates to be more like clay to be moulded or like artists ready with the character and competencies to do their own moulding? Isn’t subjectivism and the dismissal of intellectual and moral criteria modeled and advocated from the podium? Furthermore, the eternally recurring “problem” and “relentless doubt” lectures hardly make for inspiring fare and may represent significant opportunity costs. It is hard to imagine the excitement of an Archimedes in students if there is neither a discipline to discover nor a truth to follow.

Indiscriminately blaming higher education is, of course, simplistic and unwarranted. Many variables account for the state of affairs recorded by Smith and his colleagues (and frequently witnessed by those who regularly interact with youngsters). It has been traced, for example, to secularism (syndicated columnist Dennis Prager), and to parents who, for the sake of tolerance, “are failing to ensure that our children understand how to frame moral issues and make judgments about right conduct and about what is good in life” (Economist).

Again, the Smith study’s interviewees are neither necessarily representative of all young adults, nor students of discipline agnostics and nonbelievers. Even if they were, causally attributing their responses to these teachings would be untenable. Moreover, there are many academics, whether discipline believers or aspirants, who value their disciplines and fair-mindedly assess their shortcomings, insights, and contributions. They approach the podium as the place from which to share with students, to the best of their ability, their intellectual and moral resources.

The way to the podium may well be paved with good intentions. Undoubtedly, many discipline agnostics and nonbelievers are hardworking academics and honest, affable persons, who are unaware of the possible harm and opportunity costs their behavior entails. They, too, may rightly conceive educational ends and means as ultimately at the service of human dignity and the pursuit of the common good.

Yet, scepticism, says the French philosopher Jacques Maritain, “is one of the most alarming symptoms of the crisis of our civilization” (Man and the State, 1951). It is a disturbing sign of what ails some college and university podiums.

Previous 40 Days for Life -Bayamón
Next What an abortionist does