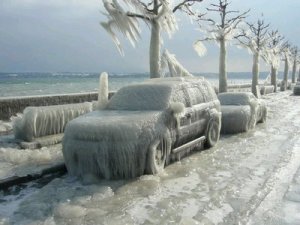 Debate with a Warmist

“Global warming is a false myth and every serious person and scientist says so. It is not fair to refer to the U.N. panel. IPCC is not a scientific institution: it’s a political body, a sort of non-government organization of green flavor. It’s neither a forum of neutral scientists nor a balanced group of scientists. These people are politicized scientists who arrive there with a one-sided opinion and a one-sided assignment.” —Czech President Klaus

Common sense informs us that warming and cooling are completely natural and that “cooling”, local or global, is usually far more pernicious than “warming”. The influence of man on climate is but an epiphenomena. However, many do not agree with these statements. The following is one of many debates I have had with colleagues who disagree.

[Warmist]
Reality does not match the view stated in your webpage. Global temperatures have risen in the last century, this is made abundantly clear by the reduction in ice volume both at the polar caps and at virtually every glacier on the planet. Science is about using models to predict effects and checking to see if observations support the model. In this case it is quite clear. Increased greenhouse gasses, according to basic thermodynamics, will increase temperatures or something else will conspire to hide the effect. Ice melts at higher temperatures. The ice is melting. Looks like a good experimental confirmation to me. If you can supply a better explanation to the observations that doesn’t require either a violation of energy conservation or a remarkable coincidence; lets hear it. It really is quite simple. Large increases in the greenhouse gasses in our atmosphere MUST have an effect. I see no way to refute this.

[Pennance]
Thank you for your comments. You state that: “It really is quite simple. Large increases in the greenhouse gasses in our atmosphere MUST have an effect. I see no way to refute this. “ I do not understand what you are saying. Effect on what? on temperature, climate, energy? It is difficult to comment on statements which are not specific. I do not dispute the correctness of the heat trapping models to which you are referring. These are theorems and hence true in any system in which their hypotheses hold. Nor do I question that greenhouse gasses are certainly a factor in the complex multi-factorial system comprising our climates. I agree that changes in the total energy of the planet is one factor effecting climate. However, the relationship is not a function –climate change will occur even if there is no change in the planetary radiation flux. What is not clear is that anthropogenic contributions to climate change are:

By the way, I fully support actions such as sensible energy conservation, pollution control, and the careful use of the earth’s resources. This is good policy independently of any effects on the earth’s climate. I do not accept the widespread claim that assertions E1 and or E2 have been demonstrated.

You say that: “Science is about using models to predict effects and checking to see if observations support the model.” Yet philosophers of science do not agree among themselves as to what science is. See for example Karl Popper, Thomas Kuhn and Paul Fayerabend for three contrasting viewpoints.

You claim that: “This is made abundantly clear be the reduction is ice volume both at the polar caps and at virtually every glacier on the planet.” Temperatures in glaciers or at the poles are not “global” temperatures. The poles have melted many times. This “local” heating could be caused by an array of factors such as changes in weather, currents, sunspot activity, orientation of the earth’s axis over time, subsurface eruptions, etc., etc. The earth is not a homogeneous fluid body.

You claim: Increased greenhouse gasses, according to basic thermodynamics, will increase temperatures.

Greenhouse gasses do help trap radiant energy. I have no doubt that CO2 concentration is one small factor that affects the earth’s climate (by the way, definitions of the term climate are vague). However, it is not so simple to deduce from this the truth of statements E1 and E2 above.

You state that reality does not match the view stated in my webpage but you do not actually explain which view. My main points are:

Statements S1 and S2 are mathematical in nature. S2 follows from S1. Many statistics text books claim -without any proof- that temperature is an interval variable yet I can find no statement in the axioms of thermodynamics which justifies this claim. On the other hand since “hotness” is an order, temperature should be at least ordinal.

As regards S3, the mathematical and practical difficulties which make the measurement (and even definition) of a mean global surface temperature problematic are outlined in various posts on this blog. Perhaps you can clarify which statements you disagree with.

[Warmist]
Please indulge me. I am not familiar with the nomenclature you are using. Are you saying that temperatures can only be ordered and therefore the relative differences between them are not defined? Please define an interval variable and explain what that has to do with temperature. What is the relevance of scale dependence? Are you claiming that there is no meaning in the quantitative comparison of one temperature to another?

[Pennance]
You ask whether temperatures can only be ordered and therefore the relative differences between them are not defined? Not exactly. I am saying that hotness is an order relation on the class of bodies and, therefore, that any function defining a change in temperature (the measure of hotness) must be at least an order-preserving function. However, temperature is not a variable of interval or ratio type which means that allowed transformations are not limited to linear or affine. (Click here for a discussion and proofs). It follows that ratios and relative differences of temperature are not physically significant as, say, are differences in length. For example, it makes no sense in classical thermodynamics to say that a temperature has doubled. Another corollary is that the concept of an average temperature is dependent on the scale used.

As a simple illustration: Imagine a planet, call it X, that has only only one weather station which for many centuries the records a constant temperature of 16°X. Suppose that in a certain year two temperature measurements are made and readings of 0°X and 36°X obtained yielding a mean of 18°X. Suppose now that the temperature scale °X is related to a scale °Y (based, say, on tree rings) by a non linear order preserving transformation which converts 0°X to 0°Y; 16°X to 4°Y and 36°X to 6°Y. When °X are used, the data shows a rise of 2°X in the mean. The same data when converted to °Y shows a fall of in the mean of 1°Y. Thus, whether we deduce warming or cooling depends on the scale used.

Thus the meaningfulness of a quantity depends crucially on the allowed changes of frame and scale. If a person is so lucky as to double his money, it would, if exchange rates were fair, have roughly the same consequences in any currency, but a doubling of the Celsius temperature of a body would be different from the corresponding doubling in degrees Fahrenheit. Moreover, since non-affine changes of temperature scale are compatible with the axioms of thermodynamics, it makes no sense to say that the temperature differences from 0 to 10 degrees Celsius and from 10 to 20 Celsius are the same (i.e. temperature differences are scale dependent).

Consider now that three temperature sets are typically used in estimating temperature, one in the UK Met Office, and two in the US, maintained, respectively by the National Oceanic and Atmospheric Administration and by the US space agency NASA. These three agencies take raw data (which they refuse to make public) and ‘homogenize’ it to deal with the anomalies caused by local variations and discontinuities, — in some cases “losing” the raw data. The existing satellite data sets are calibrated against the earth data sets. The fact that non linear transformations are used in this data “adjustment is revealed by permutations in the list of what are considered to be the warmest years of the last century. For example, 1934 has long been considered to be one of the warmest year in the US.. “Adjustments” of the NASA GISS data to reduce the temperature difference between 1934 and 1998 actually produced one such permutation. Since linear transformations of temperature data are order preserving, these permutations reveal the use of non linear data processing. As the above example clearly shows, such temperature “homogenization” by a non linear functions is physically meaningless and can transform a data set consistent with warming into one in which the average falls. Nonlinear processing does not preserve the mean. That the description of a physical system be independent of the reference frame is essential to ensure that the laws governing that system are the same for different observers. This principle is violated when the same data set produces diametrically opposed results when diferent scales are used.

[Warmist]
There are certainly problems involved in determining the mean global temperature. So what? Lots of things are difficult, that doesn’t mean that they can’t be done or that the resulting imperfect result is not useful. You seem to require that a result be perfect in order to exist. Although this may be a reasonable position in mathematics it isn’t in science.

[Pennance]
The mere belief that we can do something or measure something is no guarantee that we can. Some “difficult” things really are impossible, and, moreover, can be proven to be impossible. Examples include the writing of a computer code to determine the halting of an arbitrary program. The problem with the measurement of a mean global temperature is not that our procedures are in some way “imperfect” but rather that the concept itself is ill defined. This is a much more serious situation
Entities which are ill-defined have no place in a scientific theories and measurements on based such entities are meaningless. For good science, consensus as to basic definitions and procedures is essential. In my post “On the non existence of a global mean surface temperature.” additional mathematical reasons are given as to why mean global surface temperature is an ill defined concept, and therefore not good metric for assessment of climate —whatever that is.

[Warmist]
You seem to require that a result be perfect in order to exist. Although this may be a reasonable position in mathematics it isn’t in science.

[Pennance]
Not so! -even in Mathematics some reasonable agreement is required as to what constitutes a proof. Someone once defined a proof as a collection of symbols, a collection of people, and a consensus. Concerning anthropogenic global warming there is no consensus.